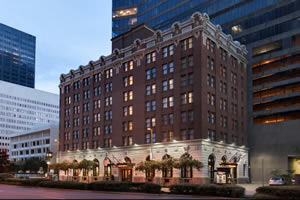 At one of the city’s most prestigious corners (Poydras & Camp) in the Central Business District, stands The Whitney Hotel of the New Orleans Hotel Collection. The hotel is, and always has been, an authentic part of New Orleans’ zeitgeist.

The Whitney Hotel made its debut as the home of the Metropolitan Bank in 1909 and while the name of this Beaux Arts beauty may have changed over the years, it has always reflected the spirit of the time. Today, this luxury boutique hotel is at the center of vibrant “La Nouvelle Orleans,” surrounded by innovative new restaurants and resurrected icons of the music scene, such as the Civic Theater and the Little Gem Saloon, where local and national acts perform nightly. With the Mercedes-Benz Superdome at one end of Poydras Street, the New Orleans Convention Center, The Outlet Collection at Riverwalk and Harrah’s Casino at the other, and the National WWII Museum, Bourbon Street and the historic French Quarter an easy stroll away, The Whitney Hotel is a central to all of New Orleans’ hot spots.