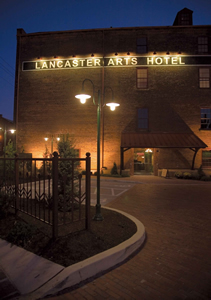 The 63 guest rooms and suites of Lancaster Arts Hotel have been appointed with comfort as well as beauty in mind. Taking a cue from the historic former tobacco warehouse that houses the hotel, designers have played with a successful juxtaposition of 21st century comforts such as wi-fi internet access, iPod docking stations, HDTV, flat-screen televisions with handcrafted furnishing, exposed ceiling beams and brick walls, and of course, that glorious art work. Stay and be inspired in this unique boutique hotel.